//
You're reading...
Show previews and information

Although it is hard to believe the little pink pig ever went away – books, magazines, DVDs, copious amounts of pink plastic knick knacks and even her own theme park, are more than enough to see that Peppa is usually kept well at the forefront of any self-respecting toddler parent’s mind.

And I for one have a three-year-old who is very excited at the prospect!

Described as “the biggest ever to date”, the show opens at the Orchard Theatre in Dartford on 24 October, and will travel throughout the UK and into Ireland until summer 2014, including a fourth consecutive Peppa West End Christmas season (details to be announced).

In the new show, the nursery roof is leaking and Peppa and her friends need to fix it quickly so they set up a fete to raise the money for Mr Bull to do the repairs.

A wealth of familiar characters, such as Peppa, George, Mummy and Daddy Pig, as well as Danny Dog, Pedro Pony and Suzy Sheep put up bunting, run stalls and organise a great day out.

There’s also a Champion Puddle Jumping competition judged by Mr Potato where everyone gets wet and Peppa needs to find her Golden Boots.

With puppets and sing-a-long songs, the new adventure is adapted and directed by Richard Lewis, who was also at the helm of the first two Peppa Pig stage shows and the current Ben & Holly’s Little Kingdom tour. 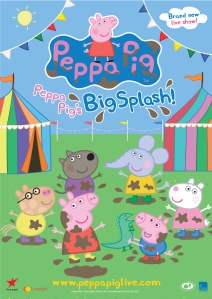 Martin Ronan, from Fiery Angel and Limelight Productions (Fiery Light) said they were “delighted” to be presenting their third live Peppa show, which was “the biggest tour yet for Peppa”.

He said: “Touring the UK & Ireland for 47 weeks, Peppa Pig’s Big Splash will be a fun-packed experience for all Peppa fans.

“To date Peppa Live has played to almost 650,000 people and as we approach the 10th anniversary of Peppa being a family favourite, we hope the new show will thrill fans up and down the country.”

More tour dates to be announced.