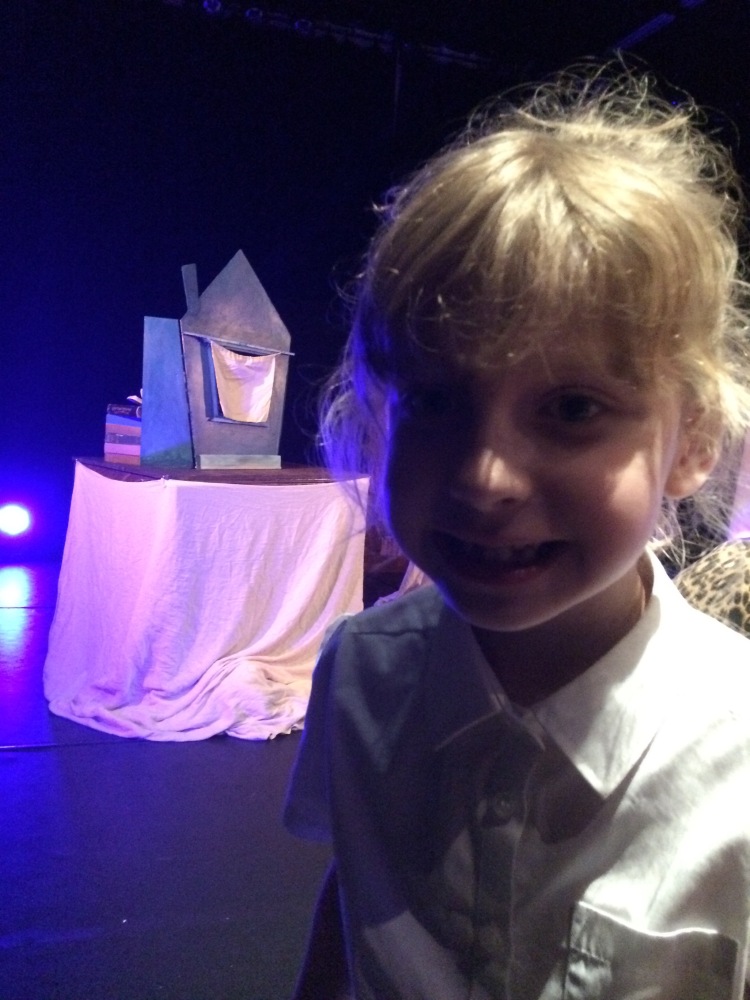 Have you ever wondered what happens when you go out, leaving your books nestled comfortably and in order on their shelves? No? Well perhaps you should?!

Monstro’s Book Story begins with puppets of a father reading to his son, Brian. The boy rejects a number of them before the dad tells a story – and from here on in it turns into a surreal but heart-warming adventure about overcoming sadness, all depicted by three live performers and their clever puppetry skills. Both books and actors sing and dance in order to bring the story to life.

Brian wants to open a library as they have so many books, so they do – at first run by his father but then Brian takes over, ably helped by two assistants.

Brian desperately wants to write his own book – don’t we all – and often wakes up from a dream and tries to write it down to make it into a story but somehow he never remembers enough.

But the library is also a magical place and what Brian and the librarians don’t know is that when the assistants have gone home and Brian has gone to bed, the books come to life and leave their shelves. They literally come out of their shelves – see what I did there – and show the audience that books have their own characters as well as the ones inside.

A lot of fun ensues, such as when Brian reads a blurb that says a book is unputdownable and when he tries to lay it on a table or back on a shelf finds he can’t let go of it.

But there is also sadness. When Brian’s dad dies he is given a box of things his dad had kept from his boyhood, including his favourite storybook. One night it accidentally gets knocked into the withdrawn box by another book and there is no time to get it out. The librarians don’t notice and so it goes out with the real withdrawals and is lost – seemingly forever.

One of the books, 1001 Big Ideas disguises himself (not very convincingly!) in Brian’s knitted hat and leaves the library to find it. It’s a fun adventure and I won’t spoil the ending but it does lead to Brian finally being happy

At about an hour long without an interval, this was a charming tale that celebrated books and reading and kept the young audience enthralled until the end. What’s more, they probably looked suspiciously at their bookshelves when they got home!

« The Sooty Show Live
The Hunting of the Snark »