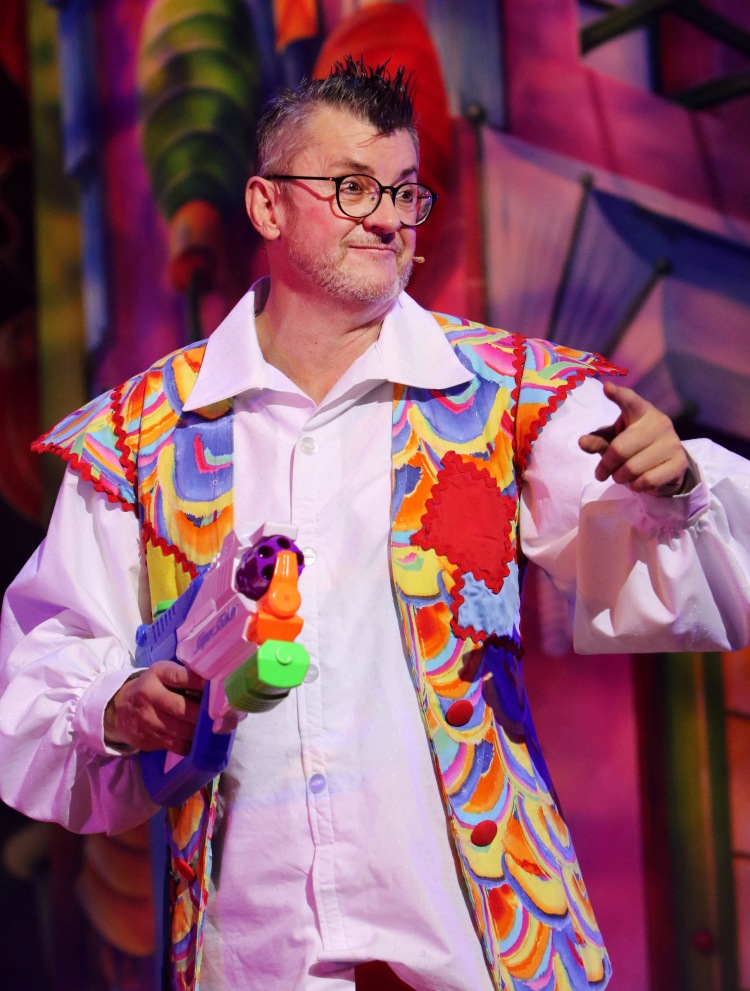 Joe Pasquale is an absolute force of nature – I can’t remember the last time I laughed as much as I did watching this year’s MKT panto. As Wishee Washee he exuded the joy of sheer silliness that he is simply a master at. You just don’t know what’s going to happen next and neither, I suspect, do the rest of the cast!

He is just outrageous, both with his slapstick comedy that the children love and the cheeky, often near the mark quips, for older ears.

You have to feel for anybody who is on stage with him as they can’t know what’s going to happen. And yet, they completely act as thought they do. Well almost – I swear I saw a glimpse of fear in their eyes at some points!  But they are complete professionals!

Who knows really whether some of the incidents were genuine mistakes or carefully directed to look like them? Either way, it’s enormously fun to watch and genuinely hilarious.

The lovely Lee Mead as Aladdin bears the brunt of it and bears it all really well – including being told he looks like a frog at regular intervals. Not an animal I would normally associate with him! He is a great foil to the madness which he deals with using great charm and the fantastic singing voice that he is known for. And to be honest it must be a blessed relief from the angst of Lofty, the long suffering nurse he plays in Holby City. Plus, it’s always great to hear a bit of his Any Dream Will Do – although naturally it was Pasquale who wore the coat of many colours!

David Robbins as Widow Twankey also takes whatever is thrown at him and adds to the crazy, not least with the numerous fabulous costume changes.

Phil Corbitt is a suitably villainous Abanazar and Tegan Bannister is a charming Princess Jasmine.

Completing the cast are Debra Michaels as the stern, yet also comedic, Empress and Sarah Earnshaw as Scheherazade the Slave of the Ring who carries off her role well as Aladdin makes much use of her to get him out of trouble.

The are some fantastic effects, not least the flying carpet which even turns upside down above the audience – a health and safety nightmare I’d imagine! Plus some off-the-wall surprises from a spectacular massive elephant and a giant hooded cobra to an animatronic blue genie and, bizarrely, six dancing pandas.

It’s spectacular entertainment for the whole family and if rolling in the aisles was an actual thing – this is as close as you can get to it happening!

« Beauty and the Beast
Peter Pan »